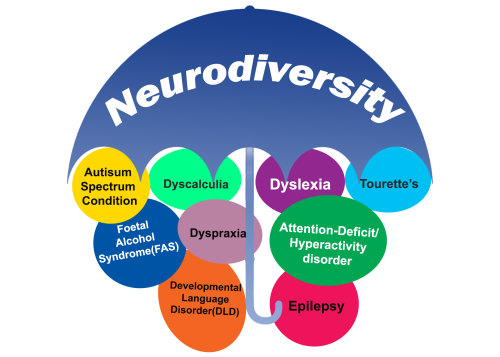 Some people think and act differently to other people because of the way their brain works. This is called neurodiversity.

Neurodiversity can affect someone's behaviour, memory or ability to learn. People experience the world in many different ways.

We are all different – we have different eyes, hair, skin, abilities and beliefs. Our brains can be different too.  Knowing more about our differences helps us to be more understanding.  1 in 5 people are neurodiverse.

We need to help one another to navigate the world and find strategies to help us all reach our potential.

Often within health pathways particular diagnoses are often given. Some have co-occurring conditions. Increasingly the idea of neurodiversity better captures how many of people who such diagnoses want to be seen in terms of difference and understanding them and support better.

A parent group in Essex has produced an excellent guide on Supporting your neurodiverse child. It includes lots of useful general information. However, for specific information about Newham services and support are provided in this website.

Skip back to top of page